In this post Naija02 be bringing you Comrade Emaluji Sunday Michael Biography, this include education, family life, political career and more. 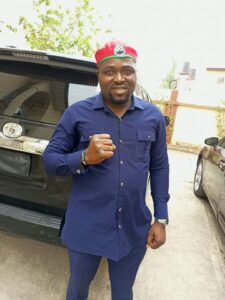 On the 5th may 1986, a bouncing baby boy was born to the family of Mr Mrs Sunday Emaluji in Yala local government area of Cross River State. This child was named Michael.

Some men are born Leaders, some learnt Leadership skills, while some others have leadership trust bestowed upon them, all this are attributed to Comrade Emaluji Sunday Michael as it is evident in the various Leadership positions he has held since his primary school days where he was the social perfect, in government model secondary school from 2001-2002, where he performed Excellently and setting the pace for his predecessor he was the financial Secretary, National Association of Science Student (NASSA) University of Jos, and then the Secretary General (SUG) University of Jos, member SUG House of Parliament unijos, SA to SUG President.

Comrade Emaluji is the CEO of Emaluji Global Nig Ltd and also Special Adviser to the Wife of the Former Governor of River State and presently Minister of Transportation, Mrs Judith Dame Amaechi

The very active comrade no doubt has performances outstandingly in his various Leadership positions and this has brought him thus far and will continue to project him as a rising star in our great country Nigeria and the world at large, he is a strong Youth Activist that believes in saving Nigeria’s Democracy, as the aphorism goes that “a golden fish cannot be hidden” so has Snr. Comr Emaluji.