What is Doja Cat Net Worth?

Doja Cat is a rapper, singer, and songwriter who first gained recognition as a teenager for making and releasing music on SoundCloud. Doja Cat has a net worth of $8 million. After signing a record deal at the age of 17, she went on to release the albums “Amala,” “Hot Pink,” and “Planet Her,” the latter two of which cracked the top ten of the Billboard 200. Doja Cat is recognized for her social media savvy, including her use of TikTok and YouTube to promote her work.

Doja Cat, whose real name is Amala Ratna Zandile Dlamini, was born in 1995 in Los Angeles, California. Her mother is a painter, while her father is an actor, composer, and film producer from South Africa. Shortly after her birth, Dlamini moved with her mother to New York City. After living there for five years, they moved to the Oak Park area of California, where Dlamini took tap, ballet, and jazz lessons. The family subsequently moved back to Los Angeles, living in an ashram in the mountains and practicing Hinduism. During this time, Dlamini’s interest in dance started to reach its peak. She danced in the style of Indian classical dance, and later moved on to breakdancing. While in high school, Dlamini competed throughout Los Angeles as part of a professional pop-locking troupe; eventually, she dropped out of high school to pursue a music career.

Dlamini taught herself how to sing and rap using the GarageBand application. After making her music, she would upload it to the online distribution platform SoundCloud. Her first permanent upload, a song called “So High,” caught the attention of record producer Dr. Luke in 2012. He subsequently signed Dlamini to his label. In the summer of 2014, under the stage name Doja Cat, Dlamini released her debut EP, “Purrr! 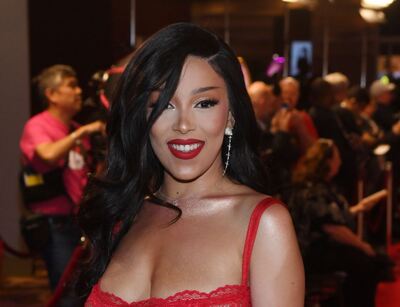 In early 2018, Doja Cat released the singles “Roll with Us,” “Go to Town,” and “Candy.” These three singles were subsequently included on her debut studio album, “Amala.” The album didn’t make much of an impression at the time of its release, mostly being ignored by critics and failing to chart. Doja Cat garnered greater attention that summer, however, when she uploaded the music video for her novelty song “Mooo!” on YouTube. Featuring the singer as she dreams of being a cow, the video became a viral success and spawned a popular meme. Following this, in early 2019, Doja Cat released the singles “Tia Tamera” and “Juicy.” The latter was later remixed, and became Doja Cat’s first entry on the Billboard Hot 100.

Doja Cat had her breakthrough as a recording artist in November of 2019, when she released her second studio album, “Hot Pink.” Eventually peaking at number nine on the Billboard 200, the album launched the hit singles “Bottom Bitch,” “Rules,” and “Say So.” The latter track became Doja Cat’s first top-ten single when it made it to number five on the Hot 100; in 2020, a remix of the song featuring Nicki Minaj made it to number one.

Largely due to the success of “Hot Pink,” Doja Cat became one of the breakout singers of 2020. Billboard ranked her at number five on its Top New Artists of 2020 list, while Rolling Stone placed her at number one on its list of the year’s biggest breakthrough artists. Subsequently, Doja Cat was nominated for three Grammy Awards, including Best New Artist and Record of the Year for her single “Say So.”

In April of 2021, Doja Cat teased her upcoming album with the release of the single “Kiss Me More,” featuring SZA. The song spent 19 consecutive weeks in the top ten of the Billboard Hot 100, peaking at number three. A couple of months later, Doja Cat released the singles “Need to Know” and “You Right”; she then released her album, “Planet Her,” which debuted at number two on the Billboard 200. It also cracked the top three in Canada, Australia, and the UK.

Following the success of “Planet Her,” Doja Cat hosted the MTV Video Music Awards ceremony in 2021. At the awards, she was also nominated for Artist of the Year, Video of the Year, and Best Visual Effects. Doja Cat won the awards for Best Collaboration, which she shared with SZA for the song “Kiss Me More,” and Best Art Direction, which she shared with Saweetie for the video to “Best Friend.”

Doja Cat has had a myriad of collaborations with other musical artists. She has been featured on songs by The Weeknd, Lil Wayne, City Girls, Ozuna, Bebe Rexha, and Ariana Grande, among others. In September of 2021, she was featured on the song “Scoop” from Lil Nas X’s debut studio album “Montero.”

Doja Cat stays relatively mum about her personal life, and prefers not to reveal information pertaining to her relationships. However, she has often alluded to her queer sexuality, and has been seen dating musicians such as Jawny and Bree Runway. In early 2021, Doja Cat purchased a $2.2 million home in Beverly Hills.

A prominent social media presence, Doja Cat has occasionally drawn controversy for her remarks. In 2018, she was criticized when the word “faggot” was found in one of her older tweets. She subsequently issued a series of apologies and deleted the tweet. Later, Doja Cat received backlash for saying that COVID-19 was merely a “flu,” and for participating in celebrations during the pandemic