President Muhammadu Buhari and his close aides are in a dilemma over the fate of his political appointees who may resign in droves if he signs the Electoral Act Amendment Bill 2022 transmitted to him by the National Assembly on January 31. 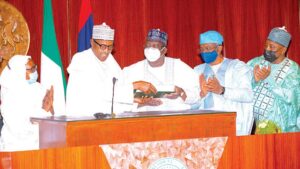 The provision that makes it mandatory for political appointees who want to run for office in 2023 to resign is seen as a clog in the wheel of the electoral law currently before the president for assent.

But these appointees, Naija02 gathered, do not want to resign because it is not certain that they will get back their positions if they lose the primary elections.

At least four ministers and a number of personalities heading Ministries, Departments and Agencies (MDAs) may be affected by this development.

Section 84 of the amended Electoral Bill on “Political Appointee not Eligible as a Voting Delegate or Aspirant” provides thus:

“(10) No political appointee at any level shall be a voting delegate or be voted for at the convention or congress of any political party for the purpose of the nomination of candidates for any election.

“(11) Where a political party fails to comply with the provisions of this act in the conduct of its primaries, its candidate for election shall not be included in the election for the particular position in issue.

“(13) Nothing in this section shall empower the courts to stop the holding of primaries or general elections under this act pending the determination of a suit.”

The president had withheld assent to the Electoral Act Amendment Bill 2021 transmitted to him on November 19, 2021, to allow each political party determine its mode of selecting candidates for election through options of direct, indirect primary and consensus.